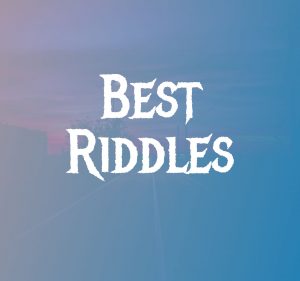 What has a head, a tail, is brown, and has no legs?

A doctor and a bus driver are both in love with the same woman, an attractive girl named Sarah. The bus driver had to go on a long bus trip that would last a week. Before he left, he gave Sarah seven apples. Why?

An apple a day keeps the doctor away!

I’m always at the dinner table, but you don’t get to eat me. What am I?

What has to be broken before you can use it?

What month of the year has 28 days?

What is full of holes but still holds water?

What question can you never answer yes to?

Are you asleep yet?

What is always in front of you but can’t be seen?

There’s a one-story house in which everything is yellow. Yellow walls, yellow doors, yellow furniture. What color are the stairs?

There aren’t any—it’s a one-story house.

What can you break, even if you never pick it up or touch it?

What goes up but never comes down?

A man who was outside in the rain without an umbrella or hat didn’t get a single hair on his head wet. Why?

What gets wet while drying?

What can you keep after giving to someone?

I shave every day, but my beard stays the same. What am I?

You see a boat filled with people, yet there isn’t a single person on board. How is that possible?

All the people on the boat are married.

You walk into a room that contains a match, a kerosene lamp, a candle and a fireplace. What would you light first?

A man dies of old age on his 25 birthday. How is this possible?

He was born on February 29.

I have branches, but no fruit, trunk or leaves. What am I?

What can’t talk but will reply when spoken to?

The more of this there is, the less you see. What is it?

David’s parents have three sons: Snap, Crackle, and what’s the name of the third son?

I follow you all the time and copy your every move, but you can’t touch me or catch me. What am I?

What has many keys but can’t open a single lock?

What can you hold in your left hand but not in your right?

What is black when it’s clean and white when it’s dirty?

What gets bigger when more is taken away?

I’m light as a feather, yet the strongest person can’t hold me for five minutes. What am I?

I’m found in socks, scarves and mittens; and often in the paws of playful kittens. What am I?

Where does today come before yesterday?

What invention lets you look right through a wall?

If you’ve got me, you want to share me; if you share me, you haven’t kept me. What am I?

What can’t be put in a saucepan?

What goes up and down but doesn’t move?

If you’re running in a race and you pass the person in second place, what place are you in?

It belongs to you, but other people use it more than you do. What is it?

What has lots of eyes, but can’t see?

What has one eye, but can’t see?

What has many needles, but doesn’t sew?

What has hands, but can’t clap?

What has legs, but doesn’t walk?

What has one head, one foot, and four legs?

What can you catch, but not throw?

What has many teeth, but can’t bite?

What is cut on a table, but is never eaten?

A deck of cards

What has words, but never speaks?

What runs all around a backyard, yet never moves?

What can travel all around the world without leaving its corner?

What has a thumb and four fingers, but is it not a hand?

What has a head and a tail but nobody?

Where does one wall meet the other wall?

What building has the most stories?

What tastes better than it smells?

What has 13 hearts, but no other organs?

A deck of cards

It stalks the countryside with ears that can’t hear. What is it?

What kind of coat is best put on wet?

A coat of paint

What has a bottom at the top?

What has four wheels and flies?

I am an odd number. Take away a letter and I become even. What number am I?

If two’s a company, and three’s a crowd, what are four and five?

What three numbers, none of which is zero, give the same result whether they’re added or multiplied?

One, two and three

Mary has four daughters, and each of her daughters has a brother. How many children does Mary have?

Five—each daughter has the same brother.

Which is heavier: a ton of bricks or a ton of feathers?

Neither—they both weigh a ton.

Three doctors said that Bill was their brother. Bill says he has no brothers. How many brothers does Bill actually have?

None. He has three sisters.

Two fathers and two sons are in a car, yet there are only three people in the car. How?

They are a grandfather, father, and son.

The day before yesterday I was 21, and next year I will be 24. When is my birthday?

A little girl goes to the store and buys one dozen eggs. As she is going home, all but three break. How many eggs are left unbroken?

A man describes his daughters, saying, “They are all blonde, but two; all brunette but two; and all redheaded but two.” How many daughters does he have?

Three: A blonde, a brunette, and a redhead

If there are three apples and you take away two, how many apples do you have?

You have two apples.

What five-letter word becomes shorter when you add two letters to it?

What begins with an “e” and only contains one letter?

A word I know, six letters it contains, removes one letter and 12 remains. What is it?

What would you find in the middle of Toronto?

You see me once in June, twice in November and not at all in May. What am I?

Two in a corner, one in a room, zero in a house, but one in a shelter. What is it?

What 4-letter word can be written forward, backward or upside down, and can still be read from left to right?

Forward I am heavy, but backward I am not. What am I?

I am a word of letters three; add two and fewer there will be. What word am I?

What word of five letters has one left when two are removed?

What is the end of everything?

What word is pronounced the same if you take away four of its five letters?

I am a word that begins with the letter “i.” If you add the letter “a” to me, I become a new word with a different meaning, but that sounds exactly the same. What word am I?

What is so fragile that saying its name breaks it?

Speaking of rivers, a man calls his dog from the opposite side of the river. The dog crosses the river without getting wet, and without using a bridge or boat. How?

The river was frozen.

What can fill a room but takes up no space?

If you drop me I’m sure to crack, but give me a smile and I’ll always smile back. What am I?