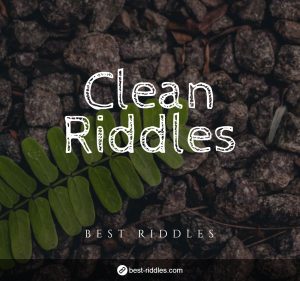 If you are looking Clean riddles Best-riddles.com Provide unlimited riddles Clean riddles and cool trivia that will shock your brain and will definitely add a lot of useful information into your general knowledge bank

There is a row of five different color houses. Each house is occupied by a man of different nationalities. Each man has a different pet, prefers a different drink, and smokes a different brand of cigarettes.

The Brit lives in the Red house.

The Swede keeps dogs as pets.

The Greenhouse is next to the White House, on the left.

The owner of the Greenhouse drinks coffee.

The owner of the Yellow house smokes Dunhill.

The man living in the center house drinks milk.

The Norwegian lives in the first house.

The man who smokes Blends lives next to the one who keeps cats.

The man who keeps horses lives next to the man who smokes Dunhill.

The Norwegian lives next to the Blue house.

The man who smokes Blends has a neighbor who drinks water.

Who has fish at home? 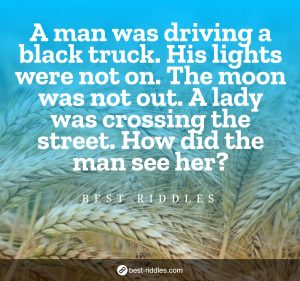 A man was driving a black truck. His lights were not on. The moon was not out. A lady was crossing the street. How did the man see her?

It was a bright, sunny day.

Ships in a port

There are 5 ships in a port.

The Greek ship leaves at six and carries coffee.

The ship in the middle has a black chimney.

The English ship leaves at nine.

The French ship with a blue chimney is to the left of a ship that carries coffee.

To the right of the ship carrying cocoa is a ship going to Marseille.

The Brazilian ship is heading for Manila.

Next to the ship carrying rice is a ship with a green chimney.

A ship going to Genoa leaves at five.

The Spanish ship leaves at seven and is to the right of the ship going to Marseille.

The ship with a red chimney goes to Hamburg.

Next to the ship leaving at seven is a ship with a white chimney.

The ship on the border carries corn.

The ship with a black chimney leaves at eight.

The ship to Hamburg leaves at six.

Which ship goes to Port Said?

Five friends have their gardens next to one another, where they grow three kinds of crops: fruits (apple, pear, nut, cherry), vegetables (carrot, parsley, gourd, onion) and flowers (aster, rose, tulip, lily).

Everybody grows exactly 4 different varieties Each variety is at least in one garden.

Only one variety is in 4 gardens.

Only in one garden are all 3 kinds of crops.

Only in one garden are all 4 varieties of one kind of crops.

Pears are only in the two border gardens.

Paul’s garden is in the middle with no lily.

In the first garden are apples and cherries.

Only in two gardens are cherries. Sam has onions and cherries.

Tulips are only in two gardens.

Apples are in a single garden.

Only in one garden next to the Zick’s is parsley.

Sam’s garden is not on the border.

Hank grows neither vegetables nor asters.

Who has which garden and what is grown where?

The mystery of the Ancient Temple

Thin as a picture frame 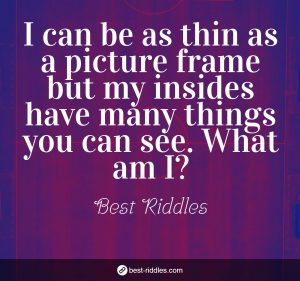 I can be as thin as a picture frame but my insides have many things you can see. What am I?
Television.

Three switches in a room

You are standing next to three switches. You know these switches belong to three bulbs in a room behind a closed door – the door is tight closed, and heavy which means that it’s absolutely impossible to see if any bulb is on or not. All three switches are now in position off.
You can do whatever you want with the switches and when you are finished you open the door and go into the room. While in there you have to tell which switch belongs to which bulb. How will you do that?
Turn on the first switch and wait for a while. Turn off the first one and turn on the second. Go into the room. One bulb is shining, the second bulb is hot and the third one nothing.

Always in the past 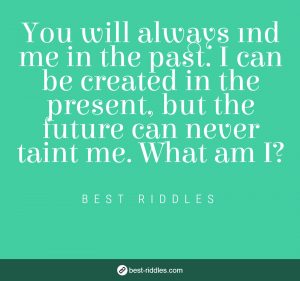 You will always find me in the past. I can be created in the present, but the future can never taint me. What am I?
History.

Others use it more

What belongs to you but others use it more than you do?
Your name.

I cannot be seen

I repeat only the last word you say. The more I repeat, the softer I got. I cannot be seen but can be heard. What am I?
An Echo.

Alexander is stranded on an island covered in forest.
One day, when the wind is blowing from the west, lightning strikes the west end of the island and sets fire to the forest. The fire is very violent, burning everything in its path, and without intervention the fire will burn the whole island, killing the man in the process.
There are cliffs around the island, so he cannot jump off. How can Alexander survive the fire? (There are no buckets or any other means to put out the fire)
Alexander picks up a piece of wood and lights it from the fire on the west end of the island. He then quickly carries it near the east end of he island and starts a new fire. The wind will cause that fire to burn out the eastern end and he can then shelter in the burnt area. Alexander survives the fire, but dies of starvation, with all the food in the forest burnt.

I don’t have eyes, but once I did see. Once I had thoughts, but now I’m white and empty.
Skull.

Give me a drink and I die

Feed me and I live, yet give me a drink and I die.
Fire.

The difference between yesterday and tomorrow?

What is the difference between yesterday and tomorrow?
Today.

A kind hearted person Mr. Rawat buy packed food at 3$/packet from United states and sells them at 1$/packet at Africa. After some time he becomes a millionaire. How come the guy become millionaire?
He started out as a billionaire, but lost so much money in his good works (by giving to poor people) that he became a millionaire.

You are in a cold house in the winter. It is dark. You have one match. There is a candle and there is a wood burning stove. Which do you light first?
The match.

Go in hard, come out soft

The more it dries

The more it dries, the wetter it gets. What is it?
A towel.

There is a word and six letters it contains. Take one away and twelve is what remains. What word is it?
Dozens.

Wednesday, Tom and Joe went to a restaurant and ate dinner. When they were done they paid for the food and left. But Tom and Joe didn’t pay for the food. Who did?
Wednesday (the name of the third person in the group, not the day).

Mr. Smith has 4 daughters. Each of his daughters has a brother. How many children does Mr. Smith have?
He has 5 children, all of the daughters have the same 1 brother.

Take off my skin

I am not alive but I grow

I am not alive but I grow. I don’t have lungs but I need air. What am I?
Fire.

You draw a line. Without touching it, how do you make the line longer?
You draw a shorter line next to it, and it becomes the longer line.

A doctor and a bus driver are both in love with the same woman, an attractive girl named Sarah. The bus driver had to go on a long bus trip that would last a week. Before he left, he gave Sarah seven apples. Why?
An apple a day keeps the doctor away!

What gets broken without being held?
A promise.

I have billions of eyes

He is my son

A boy was rushed to the hospital emergency room. The ER doctor saw the boy and said, “I cannot operate on this boy. He is my son.” But the doctor was not the boy’s father. How could that be?
The doctor was his mom.

A boy was at a carnival and went to a booth where a man said to the boy, “If I write your exact weight on this piece of paper then you have to give me $50, but if I cannot, I will pay you $50.” The boy looked around and saw no scale so he agrees, thinking no matter what the carny writes he’ll just say he weighs more or less. In the end the boy ended up paying the man $50. How did the man win the bet?
The man did exactly as he said he would and wrote “your exact weight” on the paper.

I’m named after nothing, though I’m awfully clamorous. And when I’m not working, your house is less glamorous.

What has roots as nobody sees, Is taller than trees, Up, up it goes And yet never grows?
A mountain.

I have a bed, but I do not sleep

I have a bed but I do not sleep. I have a mouth but I don’t eat. You hear me whisper, but I never talk. You can see me run, yet I never walk. What am I?
A river.