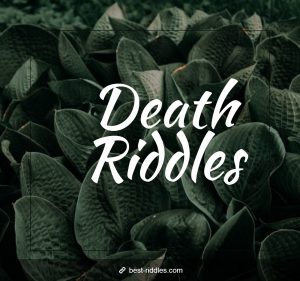 A murderer is condemned to death. He has to choose between three rooms. The first is full of raging fires, the second is full of assassins with loaded guns, and the third is full of lions that haven’t eaten in 3 years. Which room is safest for him?

The third room. Lions that haven’t eaten in three years are dead

Alive as you but without breath,
As cold in my life as in my death;
Never a thirst though I always drink,
Dressed in a mail but never a clink.

Did you hear about the Italian chef with a terminal illness?

Dipping, glinting, gliding by,
Rainbow-fretted, wrought of breath.
I live only while I fly –
Earth’s rough kiss my sudden death.

I am alive without breath and cold as death. I am never thirsty but always drinking. What am I?

It brings back the lost as though never gone, shines laughter and tears with light long since shone; a moment to make, a lifetime to shed; valued then but lost when your dead. What Is It?

Poor people have it, Rich people need it, if you eat it you die, what is it?

The manufacturer doesn’t need it, the buyer doesn’t want it, and the user doesn’t know that he’s using it. What is it?

What lives on its own substance and dies when it devours itself?

Why did the boy bury his flashlight?

Because the batteries died.

Why was Karl Marx buried at Highgate Cemetery in London?

Because he was dead

You walk into a creepy house by yourself. There is no electricity, plumbing or ventilation. Inside you notice 3 doors with numbers on them. Once you open the doors you will die a particular way.
Door #1 You’ll be eaten by a lion who is hungry.
Door #2 You’ll be stabbed to death.
Door #3 There is an electric chair waiting for you.

Which door do you pick?

Door #3, Since There Is No Electricity To Harm You.

A man watches his friend walk slowly across a room, go through a door at the other end, and slam the heavy steel door behind him. The man knows that his friend is dead. There are no windows in the door or in the walls around it. His friend wasn’t dieing as he walked across the room. The room on the other side of the door was perfectly safe, and there was no one in it. How did the man know that his friend was dead? Also, if the same thing had happened now, the man wouldn’t have died.

They were diving, wearing the old-fashioned diving suits that have a tube that goes to the surface. The were exploring a sunken submarine. When the man shut the door, it cut the air tube, and he died.

A man and a woman were driving in their car when it broke down. The man decided to go for help at a gas station a few miles back. He made sure nobody was in the car, rolled all the windows up, and locked all of the sedan’s doors. He went off, but when he came back, his wife was dead, and there was a stranger in the car. No physical damage was done to the car, so how did the stranger get in?

the stranger was a baby and the woman died in childbirth.

A couple went on for a climbing trip. But only the husband returned from the vacation and said that his wife slipped off while climbing and died. On investigating, the local sheriff arrested him saying, ‘Your travel agent called. You murdered your wife.’

The man did not inform anyone about the trip. Then how did the agent was so sure that it is a murder?

A man is found dead. When the investigation is done, he is found dead with a knife in his back. A chair sits beside him and the forensic team finds moisture around the body.

If he committed suicide, how did he do it?

The man used an ice knife. The ice was capable of holding the knife pointing upwards and he dropped down on the chair with his back towards the knife. The moisture indicates the melting of ice.

In a party, two friends ordered single malt whiskey on the rocks. One of them drank five of the same in the time when his friend was able to drink only one. Immediately after, his friend died. However the other one was feeling completely normal.

Both the drinks were poisoned. How did the guy who drink five glasses survived?

The guy who drank five glasses survived because the poison was in the middle of ice cubes. He drank rapidly and thus the ice had no chance to melt in his drink while the other one drank slowly and thus enough ice had melted in his drink to poison it heavily and he died.

British Police inspects a room where there are no windows, no doors, no tables and is almost empty expect there is just a puddle of water. They found a dead woman who obviously hung herself from the ceiling, but they are not able to figure out how this had happened.

Sherlock and John Watson entered the crime scene and easily able to solve the case.

How did the women die?

She hung herself using big Ice slabs, which are now melted and hence puddle of water.

Tarun Asthaniya is found dead in his office at his desk. The police have narrowed the suspects down to three people: Mrs. Harish Kumar, Taruns wife Himanshi Asthaniya and his buisness partner Mr. Jason Negi . All three visited Tarun on the day of his murder, but all three provide the police with stories of explanation as to the reason for their visit.
Police found Mr. tarun with his wrist watch still on his right arm, a torn up picture of his wife laying on the floor beside the trash can, and an ink pen in his right hand. On the desk, the police found a name plate, a telephone that was off the hook, and a personal calendar turned to the July 5th page with 7B91011 written on it. After examining this evidence, the police knew their suspect. Who was it ?

Jason Negi
the number on the calendar was written in a hurry , police matched the written number with the months of the year. So the B was an 8, thereby giving us 7-8-9-10-11: July, August, September, October, November. Use the first letter of each month and it spells J-A-S-O-N.

One evening there was a murder in the home of married couple, their son and daughter. One of these four people murdered one of the others. One of the members of the family witnessed the crime.

The other one helped the murderer.

These are the things we know for sure:

1. The witness and the one who helped the murderer were not of the same sex.

2. The oldest person and the witness were not of the same sex.

3. The youngest person and the victim were not of the same sex.

4. The one who helped the murderer was older than the victim.

5. The father was the oldest member of the family.

6. The murderer was not the youngest member of the family.

Who was the murderer?

There is so small cabin inside a deep forest.
All the forest burned out to worst possible but the inside of the cabin is still the same.
However all the person inside the cabin die.

Acting on an anonymous phone call, the police raid a house to arrest a suspected murderer. They don’t know what he looks like but they know his name is John and that he is inside the house. The police bust in on a carpenter, a lorry driver, a mechanic and a fireman all playing poker. Without hesitation or communication of any kind, they immediately arrest the fireman. How do they know they’ve got their man?

The fireman is the only man in the room. The rest of the poker players are women.

Henry has been caught stealing cattle, and is brought into town for justice. The judge is his ex-wife Gretchen, who wants to show him some sympathy, but the law clearly calls for two shots to be taken at Henry from close range. To make things a little better for Henry, Gretchen tells him she will place two bullets into a six-chambered revolver in successive order. She will spin the chamber, close it, and take one shot. If Henry is still alive, she will then either take another shot, or spin the chamber again before shooting.

Henry is a bit incredulous that his own ex-wife would carry out the punishment, and a bit sad that she was always such a rule follower. He steels himself as Gretchen loads the chambers, spins the revolver, and pulls the trigger. Whew! It was blank. Then Gretchen asks, ‘Do you want me to pull the trigger again, or should I spin the chamber a second time before pulling the trigger?’

What should Henry choose?

Henry should have Gretchen pull the trigger again without spinning.

Alexander is stranded on an island covered in forest.

One day, when the wind is blowing from the west, lightning strikes the west end of the island and sets fire to the forest. The fire is very violent, burning everything in its path, and without intervention the fire will burn the whole island, killing the man in the process.

There are cliffs around the island, so he cannot jump off.

How can the Alexander survive the fire? (There are no buckets or any other means to put out the fire)

Alexander picks up a piece of wood and lights it from the fire on the west end of the island.

He then quickly carries it near the east end of he island and starts a new fire. The wind will cause that fire to burn out the eastern end and he can then shelter in the burnt area.

Alexander survives the fire, but dies of starvation, with all the food in the forest burnt….lolzzz

There is a certain crime, that if it is attempted, is punishable, but if it is committed, is not punishable. What is the crime?

It is a murder you can describe in a word.

Three kids
Jack: Hey, how are you, man?
Bill: Not bad, got married and I have three kids now.
Jack: That’s awesome. How old are they?
Bill: The product of their ages is 72 and the sum of their ages is the same as your birth date.
Jack: Cool..But I still don’t know.
Bill: My eldest kid just started taking piano lessons.
Jack: Oh, now I get it.

How old are Bill’s kids?

Lets break it down. The product of their ages is 72. So what are the possible choices?

The sum of their ages is the same as your birth date. That could be anything from 1 to 31 but the fact that Jack was unable to find out the ages, it means there are two or more combinations with the same sum. From the choices above, only two of them are possible now.

Since the eldest kid is taking piano lessons, we can eliminate combination 1 since there are two eldest ones. The answer is 3, 3 and 8.

On my way to St. Ives I saw a man with 7 wives. Each wife had 7 sacks. Each sack had 7 cats. Each cat had 7 kittens. Kitten, cats, sacks, wives. How many were going to St. Ives?