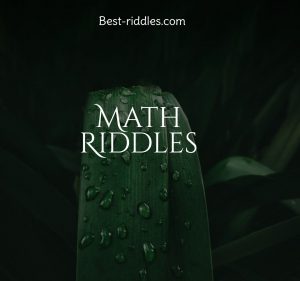 If you are searching for  Math Riddles you are in the right place. There are a lot of Best Math Riddles with their answers. You can send it to your friends, family member or to anyone which you know. If you send a Riddle to someone he will be confused. If they are genius then they can solve the Riddle. We can divide people in this world into two categories according to Riddles. One type of person is that who thinks and works hard to solve the riddles. Another type of person is that who say what answer is and do not think about itself. This does not matter that you are a genius or not if you work hard and think again and again you can solve riddles. Riddles can increase the level of your genius.

There are many advantages of Riddles. If you are sad then find interesting riddle and full focus on that riddle. Your mind will think about the riddle and will forget about sadness. You feel happy after solving the riddle. If your children say we are bored then give them a riddle from (www.best-riddles.com). They will enjoy riddle. You can also check Math Riddles from our site.

This is the best place for riddles and answers in this world. Here you can check your puzzle mind power. In this post, you can find the best Math Riddles. This is your mission to solve these Riddles. Do not worry this is not a mission impossible. As I said earlier if you work hard you can solve every riddle.

How do you make the number 7 an even number without addition, subtraction, multiplication or division?

Remove the 2 letters F and E from five and you have IV.

How many sides does a circle have?

Two. The inside and the outside.

Can you write down eight eights so that they add up to one thousand?

How many times can you subtract the number 5 from 25?

Once, because after you subtract it’s not 25 anymore.

What did one math book say to the other math book?

Do Do you want to hear about my problems?

When John was six years old he hammered a nail into his favorite tree to mark his height. Ten years later at age sixteen, John returned to see how much higher the nail was. If the tree grew by five centimeters each year, how much higher would the nail be?

The nails would be at the same height since trees grow at their tops.

There is a clothing store in Bartlesville. The owner has devised his own method of pricing items. A vest costs $20, socks cost $25, a tie costs $15 and a blouse costs $30. Using the method, how much would a pair of underwear cost?

$45. The pricing method consists of charging $5 for each letter required to spell the item.

One is to three as three is to five and five is to four and four is the magic number.

What is the pattern? 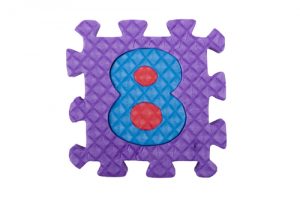 Two fathers and two sons sat down to eat eggs for breakfast. They ate exactly three eggs, each person had an egg. The riddle is for you to explain how

One of the ‘fathers’ is also a grandfather. Therefore the other father is both a son and a father to the grandson.

In other words, the one father is both a son and a father.

Using only addition, how can you add eight 8s to get the number 1,000?

What 3 positive numbers give the same result when multiplied together as when added together?

One out of 9 otherwise identical balls is overweight. How can it be identified after 2 weighings?

Weigh a group of 3 balls against another group of 3, then you’ll know which group of 3 contains the heavy ball. Pick 2 balls from that group and weigh one against the other.

If you can purchase 8 eggs for 26 cents, how many can you buy for a cent and a quarter?

The ages of a father and son add up to 66. The father’s age is the son’s age reversed. How old could they be (there are 3 possible solutions)?

Three friends check into a motel for the night and the clerk tells them the bill is $30, payable in advance.

So, they each pay the clerk $10 and go to their room. A few minutes later, the clerk realizes he has made an error and overcharged the trio by $5.

He asks the bellhop to return $5 to the 3 friends who had just checked in. The bellhop sees this as an opportunity to make $2 as he reasons that the three friends would have a tough time dividing $5 evenly among them; so he decides to tell them that the clerk made a mistake of only $3, giving a dollar back to each of the friends.

He pockets the leftover $2 and goes home for the day.

Now, each of the three friends gets a dollar back, thus they each paid $9 for the room which is a total of $27 for the night. We know the bellhop pocketed $2 and adding that to the $27, you get $29, not $30 which was originally spent.

Where did the other dollar go?

The trick to this riddle is that the addition and subtraction are done at the wrong times to misdirect your thinking – and quite successfully for most.

But we know that the clerk will tell us that they were charged only $25 and when you add the $3 returned with the $2 kept by the bellhop, you come up with $30.

Two fathers and two sons go fishing. Each of them catches one fish. So why do they bring home only three fish?

Because the fishing group consists of a grandfather, his son, and his son’s son.

The day before yesterday I was 21 and the next year I will be 24. What day is my birthday?

I am an odd number. Take away a letter and I become even. What number am I?

Peter is 54 years old, and his father Joe is 80. How many years ago was Joe three times the age of his son Peter?

There are several books on a bookshelf. If one book is the 4th from the left and 6th from the right, how many books are on the shelf?

I am a three-digit number. My tens digit is five more than my one’s digit. My hundreds digit is eight less than my tens digit. What number am I?

A snail is at the bottom of a 20 meters deep pit. Every day the snail climbs 5 meters upwards, but at night it slides 4 meters back downwards. How many days does it take before the snail reaches the top of the pit?

A man dies of old age on his 25th birthday. How is this possible?

He was born on February, 29th.

If it were two hours later, it would be half as long until midnight as it would be if it were an hour later. What time is it now?

A farmer has 17 sheep and all but 9 dies. How many are left?