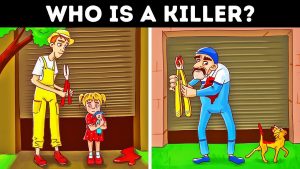 Are you brave enough to face these Scary riddles on crime that will keep you up all night?! Try not to break your mind solving these puzzles! These Scary riddles will bring out the Sherlock in you! To solve them easily you must be very attentive and have a cold mind! Try these brain teasers out and share your answers to the most difficult ones.

The poison was in the ice.

A woman shoots her husband, then holds him underwater for five minutes. A little while later, they both go out and enjoy a wonderful dinner together. How can this be?

She shot her husband with a camera and then developed the photo.

A man was found dead with a cassette recorder in one hand and a gun in the other. When the police came in, they immediately pressed the play button on the cassette. He said “I have nothing else to live for. I can’t go on,” then the sound of a gunshot. After listening to the cassette tape, the police knew that it was not a suicide, but a homicide. How did they know?

If the man shot himself while he was recording, how did he rewind the cassette tape?

A man is found murdered on a Sunday morning. His wife calls the police, who question the wife and the staff, and are given the following alibis: the wife says she was sleeping, the butler was cleaning the closet, the gardener was picking vegetables, the maid was getting the mail, and the cook was preparing breakfast.

Immediately, the police arrest the murderer. Who did it and how did the police know?

The maid. There is no mail on Sundays.

A crime has been committed at Freemont Street. The main suspect is a man named Sean Baker. It was said that a man had been walking along the pathway when he was suddenly shot in the stomach. The suspect had brown hair, blue eyes and wore a baggy Armani suit just like Sean Baker’s. Sean was asked to tell the story right from the beginning. “Well,” said Sean, “I was just hanging around the park when I saw this man walking along the pathway. Suddenly, a guy came up from behind him and shot him! I ran home as fast as I could. The policemen asked him to give a description of the murderer. “He had a red mustache, red hair and a baggy Armani suit on.”

“I think this man is telling a lie,” said one of the policemen. How did he know?

How can the murderer shoot him in the stomach if he came up behind the man?

A wealthy man lives alone in a small cottage. Being partially handicapped, he had everything delivered to his cottage. The mailman was delivering a letter one Thursday when he noticed that the front door was ajar. Through the opening, he could see the man’s body lying in a pool of dried blood. When a police officer arrived he surveyed the scene. On the porch were two bottles of warm milk, Monday’s newspaper, a catalog, flyers, and unopened mail. The police officer suspects it was foul play. Who does he suspect and why?

The Smith family is a very wealthy family that lives in a big, circular home. One morning, Mr. Smith woke up and found his gardener’s body. He knew it was one of his employees who had killed him. So he asked them what they were doing in the morning and he got these replies.

Driver: “I was outside washing the car.

Maid: “I was dusting the corners of the house.

Cook: “I was starting to make lunch for later.” From the replies, he knew who the killer was. Can you guess who it was?

The maid, because they lived in a circular house and she was apparently “dusting the corners” of the house at the time of the murder – the house is round, therefore it has no corners.

A young girl was found murdered

On the first day of the school, a young girl was found murdered. Police suspect four male teachers and question them. They were asked what they were doing at 8:00 am.

Mr. Walter: I was driving to school and I was late.

Mr. Benjamin: I was reading the newspaper.

Mr. Calvin: I was with my wife in my office.

The police arrested the killer. How did the police find the murderer?

Mr.Thomas as he cannot be checking exam papers on the first day of school.

Always come down and never ever go up

I always come down and never ever go up? Think, think and think! We all just love it.
Rain.

The word which reads the same when written forward, backward or upside down

I know a word that reads the same when written forward, backward or upside down.

Dodge was staying with Cousin Jamie in Jamie’s lakeside cabin. They were setting up Jamie’s will. As Dodge was Jamie’s closest living relative, much of Jamie’s estate was being left to him. One day, Jamie went to Dr. Dodge very disturbed. “Doctor,” he began, “I have just found out that a man named Georgio wants to get me. He will be here very soon. Where will I go? Where can I hide? If he finds me here, he will surely kill me. I do not have time to leave this clearing and go farther into the woods.”

Dr. Dodge thought for a moment and then grabbed a 5′ long bamboo pole, with a diameter the size of a quarter. “Jamie, follow me out to the lake. This lake is 4′ deep. If you lie on the bottom of the lake and breathe through this pole, Georgio will never find you. I will be in the bulrushes with a shotgun, and I will shoot him when he comes. I will swim down to find you when he is gone.” Jamie consented and lay down on the bottom of the lake with the bamboo pole in his mouth. A few hours later, a ranger passed by. He found Jamie’s body, dead. Dr. Dodge told the police of the circumstance, and that Jamie had probably panicked, and died. Police arrested Dr. Dodge, on the charges of murdering Jamie. Why?

The bamboo pole did not have any cracks or holes. Its opening was above water the whole time.

Jamie died of carbon dioxide poisoning. The pole was 5′ long, but only the size of a quarter. The first time he breathed in, he breathed oxygen. When he exhaled, the air could not travel 5′ before he breathed in again. He was just breathing what he exhaled. Before long, all he was breathing was carbon dioxide. He died of CO2 poisoning. Doctor Doge was the one who told him to use the pole, therefore the cause of his death. Dodge is a DOCTOR and therefore knows about the CO2. Dodge did the murder, Jamie. His motive: the money in the will.

Shot to death while in his car

A man was shot to death while in his car. There were no powder marks on his clothing which indicated that the gunman was outside the car. However, all the windows were up and the doors locked. After a close inspection was made, the only bullet-holes discovered were on the man’s body. How was he murdered?

The victim was in a convertible.

A man is found hanging in a room 30 feet off the ground. There is nothing else in the room except for a large puddle of water on the ground. The police can’t see any way the man could have climbed the walls to get to where he is hanging.

How did this man hang himself?

He stood on a tall block of ice and put the noose around his neck. Once the ice melted, he was hung, and all that was left was a puddle of water on the ground.

What is the next number in the sequence:

Each number in the sequence is a representation of the number 32 in different bases, starting with base 10.

There was a plane crash every single person died. Who survived?
Married couples.

In a hotel, a man was sleeping when he heard a knock on the door. He shifted the blanket and stepped down from the bed. He walked to the door and opened it to find a stranger standing outside. Upon opening the gate, that stranger said, “Pardon me, I must have made a mistake. I thought this was my room.” The stranger then walked the corridor and climbed down the stairs. The man closed the door and immediately called security. He asked them to arrest that stranger immediately. Why did he ask them to arrest that stranger? What made him suspicious?

The stranger said that he thought the room was his. If so, he would have had the keys to the room and thus he not have knocked.

Growing through the years

I’m tall when I’m young, I’m short when I’m old, and every Halloween, I stand up inside Jack O’Lanterns. What am I?

A zombie, a mummy, and a ghost bought a house. It has all of the usual rooms except for one. What room won’t you find?

I have hundreds of ears, but I can’t hear a thing. What am I?

This place has hardly any lights, but a lot of creaking floors. There are all kinds of strange noises and some random slamming doors. What is it?