The first three of those are rhyming riddles, with the phrase ‘envelope’ finishing the rhyme of the 1/3, while the fourth is a What Am I riddle.

To use that final concept, read the clue that’s on the first line to your youngsters and feature them try guessing the solution. As the clue is that it’s something that has matters placed inside it however which isn’t a cabinet, they could guess that it’s a bag, an oven or a trash can.

If they don’t bet that the answer is an envelope, study them the second clue and ask them to take some other guess. Keep doing this till they both training session that an envelope is the solution or they run out of clues. 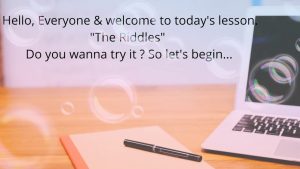 Office work is already stressful as it’s far, now not to say the added pressure through terror boss and weekly cut-off dates. Fortunately, you can nonetheless experience operating in a gloomy place of business and turn it right into a excellent area by means of having amusing every so often.

We highly guarantee that having amusing every now and then will boom your productivity. Good aspect we’ve got the first-class workplace riddles starting from easy ones to mind-blowing ones! These riddles would truly preserve your thoughts distracted for a while.

If you like workplace jokes, you may try and resolve this by yourself or together with your officemates if you are becoming bored with your workplace responsibilities.

Something Youll Find On A Desk

This is something youll find on a desk
Its used to fix one sheet to another sheet
Put the paper in it and push down
And itll bend around two metal feetWhat is it?
Its a stapler

One inch, three inch, five inch
Choosing one is not a breeze
Because size can matter
When using one of theseWhat is this?
Its a Binder

Filling these items with brown/black stuff
I am sure you will be agreeing
Ensures everyone in the office
Starts the day as a human beingWhat is this?
A Coffee Mug

I Help With Your Paperwork

My name sounds as though I like to fight
But you will actually find Im kinder
Because I help with your paperwork
By ensuring it goes in a binderWhat is this?
A Hole Punch

Always On A Roll

If youre needing something adhesive
As attaching stuff is your goal
Then make sure you come looking for me
As I am always on a rollI am?
Sticky Tape

I Am Not A Queen

Contrary to my name
I am not a queen
Hold me up to things though
And their length is seenWhat could I be?
A ruler

I Have A Blade

Im not a razor
But have a blade
I unblunt items
That have a gradeWhat am i?
A Pencil Sharpener

Fill Me Up With Metal

Fill me up with metal
And let me do my thing
Get some sheets of paper
Ill have them attachingI am a?
Stapler

Meeting In The Office

If you have a meeting in the office
Youll need to know the time and place
Something that can help with one of these things
Has two or three hands over its faceWhat is this?
A clock

This guys office is on the 30th floor of the building. Everyday,he gets off at the 25th floor and walks the extra 5 floors up stairs. Why does he walk the extra 5 floors rather then taking the elevator?
He is a midget. He is to small to reach any higher then the 25 button!

A new medical building containing 100 offices had just been completed. Mark was hired to paint the numbers 1 to 100 on the doors. How many times will Mark have to paint the number nine?
Did you say three? The correct answer is twenty (29, 39, and so on).

A woman walked into an office building, looked at the guard, and said her name was Jenny. The next day she walked into the same building, looked at the same guard and said her name was Julie. What is going on?
The woman has Multiple Personality Disorder. This happens when a traumatic experience causes so much pain that they make another personality to cope with the situation

The Murder Of Ray Whitcombe

Ray Whitcombe is found dead in his office at his desk. The police have narrowed the suspects down to three people: Mrs. Barbara Whitcombe, Ray’s wife; Mr. Jason McCubbins, Ray’s business partner; and Mr. Harold Nichols, Ray’s best friend. All three visited Mr. Whitcombe the day of his murder, but all three provide the police with stories of explanation as to the reason for their visit. Police found Mr. Whitcombe with his wrist watch still on his right arm, a torn up picture of his wife laying on the floor beside the trash can, and an ink pen in his right hand. On the desk, the police found a name plate, a telephone that was off the hook, and a personal calendar turned to the July 5th page with 7B91011 written on it. After examining this evidence, the police knew their suspect. Who was it?
Jason McCubbins, Ray’s business partner. The calendar is the clue to solving this murder. The police realized that since Mr. Whitcombe was wearing his watch on his right arm, he must be left handed. But the pen was found in his right hand. Realizing that the number on the calendar was written in a hurry and with his opposite hand, police matched the written number with the months of the year. So the B was an 8, thereby giving us 7-8-9-10-11: July, August, September, October, November. Use the first letter of each month and it spells J-A-S-O-N.

Brad stared through the dirty soot-smeared window on the 22nd floor of the office tower. Overcome with depression he slid the window open and jumped through it. It was a sheer drop outside the building to the ground. Miraculously after he landed he was completely unhurt. Since there was nothing to cushion his fall or slow his descent, how could he have survived the fall?
Brad was so sick and tired of window washing, he opened the window and jumped inside.